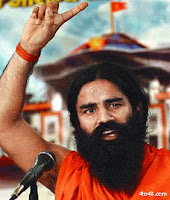 People say I'm living in denial. Yes I do. I deny corruption (who wouldn't) and equally I deny the preposterous attempts to curb it.

“We are corrupted by prosperity” -  Publius Cornelius Tacitus

Does power corrupts everyone? According to Frank Herbert power attracts the corruptible. Government is corruptible (Who isn't), administration is corrupted (What isn't). Who says Lokpal dudes can not be corrupted. It's simple concept, they will get power (ah you know they have to check corruption) to inspect the supreme authority of nation. Bah! we just discussed power attracts corruptible (In your face). So why endure all this ridicule of hunger strike. I never got the point behind hunger strikes (say of mere 4 days), and the corrupt government is all shaken from its entrenched politics. The whole system is wrong. I'm the new Gandhi.

'Corruption is like a ball of snow, once it's set a rolling it must increase' - Charles Caleb Colton


Baba! Baba! Baba!. Namaskara. Please accept some moolah as 'Guru Dakshina' Baba. With all due respect you have crossed all limits of insanity. Electronic Media, Print counterparts, Interviews, Articles and not to forget the taste of special reports by our dear channel 'India TV', baba is so busy making his public image (oops did I say making, I mean polishing, how can I forget the Yoga) that he can cry on TV (like some Big Boss contestant), contradict himself frequently (like so-called corrupt government), and make lots of stupid(Sorry Impeccable) demands because I'm Baba after all. Am I supposed to know the legislature? Hell No. I'm only supposed to protest against Law & Order (which obviously I don't know) with all my army. Don't worry my army will go whichever way I show them. I'm the new Subash Chandra Bose.

I don't say everything done is a publicity stunt by our anti-corruption activists (haha please stop, I can't take it any more). There is a way to demonstrate and demand for transparency in existing system. We can start by implementing some of advices given by Mr. Kaushik Basu, Chief Economic Advisor to government of India. But neither demanding the power in our own hands (Anna) nor showing the power of our hands (Ramdev) is an alternative.